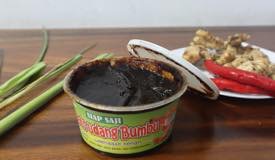 Petis is a dark brown to black sticky paste produces from an extract of shrimp or fish, which is used as an appetizer or as an ingredient in some traditional foods. Petis is produced and is famous among people in areas of eastern Java such as Sidoarjo, Gresik, Lamongan, Tuban and Madura. Some raw materials of Petis are freshwater shrimp Macrobrachium rosenbergii, extract of scad mackerel, and extract of bivalve. The production of Petis begins with the extracts preparation. The extract mixed with squid ink as the natural color and specific spices, and then boiled for one hour. Remove the residue, and reboiled the filtered extract. Let the extract cool, and continue with tapioca or rice flour and boiled for another hour. Let the dough for 24 hour, and repeat to boil again. Put the dough back until the heat is completely gone and the packging process begins.

Surely, there are differences Petis from each region, such as Petis from Sidoarjo and Cirebon are more likely to be brown because they made from small shrimp (rebon). Then, Petis from Boyolali made from stew of beef jerky or shredded meat. Whereas Petis from Semarang has a sweet taste and darker black color. Petis from Madura made from tuna or skipjack tuna and has spicy taste because they add chili in it.

Sidoarjo Petis is a typical food of Sidoarjo because it is made from real shrimp that heated to more thick texture. Then, added caramel shell sugar. This is what causes the color to become more concentrated and a little sweet. Petis is widely used as a basic ingredient for seasoning or sauce. For tourists who want to taste the special foods of Sidoarjo must buy this Petis.

Petis Sidoarjo is widely known as one of delicious Petis products. This is because Petis Sidoarjo uses selected basic materials and good quality to be able to produce the best Petis. For Petis fans, of course they can distinguish the delicious taste of Petis from the bad ones. Although different, but a matter of taste, Petis is always the best.