Candi Pari is a temple which is located about 2 km to the northwest of the center of PT Lapindo Brantas mudflow today. This temple is located in the village of Candi Pari, Porong district, Sidoarjo regency, East Java Province. This temple is a rectangular building of brick, facing to the west with the threshold and the gates made by andesite natural stone.

In the past, above the gate there was a stone with the numbers in 1293 Saka = 1371 AD. It is a relic of Majapahit in the reign of King Hayam Wuruk 1350-1389 AD
In fact, the temple was built around 1371 in the era of King Hayam Wuruk (Majapahit) by looking up the temple, this is able to give a picture of how the complexity of economic issues, political, cultural, and social aspects of the other at that time. 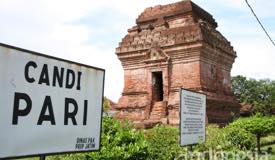 The architectural style Pari temple was influenced by the Campa culture, which is an area in Vietnam right now, especially the temples in Mison. This influence is seen in buildings and ornaments, however Candi Pari still shows the character of Indonesia. According to the foks legend, this temple was build to comemorated the lose of Joko Pandelegan.

Candi Pari has Hindu religious background. This is reflected in the reliefs of Sankhadi Candi Pari, which is an attribute in the Hindu religion. Pari temple was built facing to the west with a length of 13.55 m, 13.40 m width and height about 13.80 m. It made of brick, while the upper and lower chambers of the temple entrance using aggregates.