Mpu Tantular East Java State Museum is a continuation of Stedelijh Historisch Museum in Surabaya, which was founded by Godfried Hariowald Von Faber in 1933.
Initially, the institution was just showing off the collection in a small space in Readhuis Ketabang
Because of the generosity of a widow named Han Tjong King, the museum moved to Tegal Sari Street which had a wider building. As the time goes by, the observers of the museum had initiatively move the museum into a more appropriate location, at Jalan Pemuda No.3 Surabaya. The inauguration was on June 25, 1937.

After the death of Von Faber, the museum was managed by the Public Education Foundation which was supported by the Ministry of Education and Culture.
The museum opened to the public on May 23, 1972 under the name of East Java Museum. On February 13, 1974 the museum had changed its status to be a public museum, which was inaugurated on November 1, 1974 with the name of the East Java State Museum. 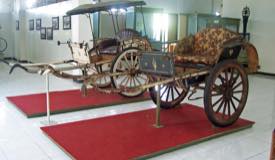 Because of the increasing collections, the museum was requires a wider area, until on August 12, 1977, the museum was officially occupies a new location, at Surabaya No.6 on Taman Mayangkara Road.

After some decades, the collections are become more complete and there are more educational activities which carried on the museum.Thus, it requiring a larger location, finally on May 14, 2004 the museum re-opened and occupy new place in Sidoarjo, in Buduran Road, Buduran district, Sidoarjo regency.

THE MEANING OF MPU TANTULAR
Mpu Tantular choosen as a name for National Museum of East Java because to respected his point of view about live in Indonesia and its called Power Element National of Indonesia which is Bhineka Tunggal Ika. Mpu Tantular is a philologist from East Java who was live in 14th Century. When he have research about the glorious period of Majapahit Kingdom.