For Indonesian, batik cloth is not something new. Almost every region has its own batik style, as the evidence of Indonesia's culture rich. Likewise in Sidoarjo, batik cloth, especially traditional written batik, is still well maintained, as a pilot village is Jetis written batik village, Sidoarjo. Named kampoeng batik, because most of the residents of Jetis Village Sidoarjo District are batik craftsmen. They also sell their work directly in their homes. Therefore, this area was confirmed as Kampoeng Batik Tulis Jetis, Sidoarjo.

Jetis village, starting from the front gate until the road is almost filled with batik cloth shops. Even now, not only batik cloth produced, some also sell Muslim clothing. The visitors of batik village mostly like to buy those authentic Jetis Batik because those have good quality as hand-written batik. While the visitors come from several big cities such as, Jakarta and others came from China. Surely they really like handmade products, especially in affordable prices. The price for a piece of batik cloth offered IDR 150 thousand to millions of rupiah. 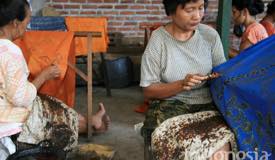 Jetis handmade batik cloths are rich in motifs including redish and greenish (Madura style), Kutah rice motifs, krubutan motif (mixed), there also peacocks motifs, and other motifs. Jetis batik motif is dominated by flora and fauna typical of Sidoarjo which has bright colors, red, green, yellow, and black. The superiority of Jetis batik is precisely its striking color.

Sidoarjo traditional batik itself is mainly centered in Jetis since 1675. Its location is in front of Jamek Mosque or now called Al Abror Mosque. From the Sidoarjo square, Batik Village is on the South side, about 10 minutes away by car.