Indonesia is not only rich in cultural diversity. However, there are various historical stories from the city of Heroes, Surabaya. We can find stories about the history of this nation from movies, books, fairy tales, songs and even tourist spots. This of course makes Surabaya, a city with various stories.

In addition to make visitors more familiar with the history of the Indonesian nation, Surabaya is a space for education and remember about what the beginning of the existence of Surabaya and all other unique buildings. Maybe from here, we can find answers to the reasons why Surabaya was made the city of heroes with various other stories. So of course, studying history in Surabaya is a choice that to be the right one with various interesting places in it.

Submarine Monument
One of the destinations that quite phenomenal is the Submarine Museum. From the name, we already know that this will show more exhibits about submarines. As for the location, this museum is the closest historical place to the city center that can be visited. This ship was used as a fleet in the Battle of Aru Sea which to this day still has historical remnants attached to the submarine monument. The cause of this battle was to re-liberate West Irian which was being occupied by the Dutch. So, to commemorate the bravery of the heroes, this ship was deliberately brought ashore. However, previously this submarine was cut in advance to make it easier to carry it.

Jalan Gula and Jalan Karet (name of road)
The name of an area that quite unique and often use as place for pre-wedding photos. Jalan Gula dan Jalan Karet roads have interesting vintage spots, so don’t be surprised if these two roads are often used as spots for making films, short videos, hangout spots and even pre-wedding spots. The location of this road is not far from the Red Bridge (Jembatan Merah). So, after visiting this historical location, we can go to the red bridge as an interesting historical place.

The interesting thing about this area is that it feels as if you are entering the passage of time during the colonial period in the past. This impression is obtained because the surrounding buildings have not undergone many changes, so they still seem vintage.

Siola Building or called the Surabaya Museum
From this place we are invited to visit and down the aisle of time in Surabaya. A magnificent building located on Jalan Tunjungan is usually known as White Laidlaw. This place is used as a commercial company engaged in convection and textiles from England. The uniqueness of this place is the existence of an artistic building similar to Siola as a historical place in Surabaya. The reason is, this building is a historical relic of the defense against the Allies. However, when it entered during the independence period, this white building was converted into a modern shopping center. Until in the end, it began to turn into the Surabaya Museum. From this building, we will be invited to travel time and reminisce together about the history of Surabaya. 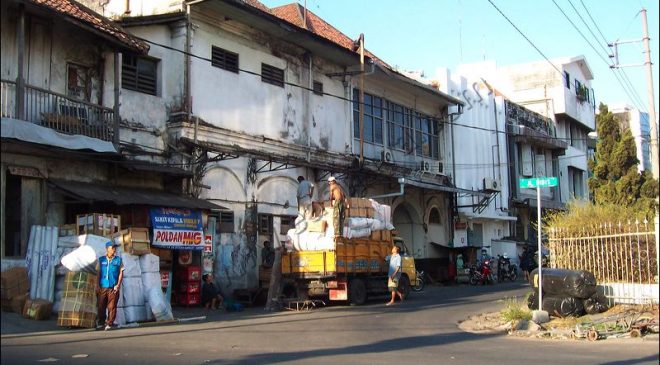