For Indonesians, the name of Kepulauan Seribu is already familiar. However, it is different from foreign tourists who rarely hear about the beauty of these islands. They do not think that there is a beautiful natural tourism that is not far from Jakarta. Want to know more details?

When boarding the ship to Seribu islands, foreign tourists find it difficult to communicate with the ship’s crew, because most of them do not speak English. This is because the crew in Kepulauan Seribu are mostly local people who do not speak foreign languages.

The journey only takes one hour via speedboat. However, some foreign tourists admitted that they were a little nauseous after arriving at the Thousand Islands. Whether the ship is not good or the waves of the sea make them a little nauseous.

If they come during the rainy season, they are disappointed because they are not exposed to the sun at all, even though the vibes are already very tropical. Some tourists who are not familiar with the rhythm of Indonesia’s weather sometimes take the wrong day to travel. Finally, some are disappointed if the day is cloudy.

Much different if you come during the dry season, the air feels very hot. For those who are rarely exposed to hot air, it will be difficult to adapt. Moreover, tourists who come from cold countries such as Scotland, Canada, Russia and others. They say that Indonesia is very hot in the dry season.

The price of food sold in Kepulauan Seribu is quite affordable. For one serving of delicious fried rice, it’s only around 25 thousand rupiah. Street food in Indonesia is very cheap. This has been confirmed by almost all tourists from all countries who travel to Indonesia.

In addition to fried rice, visitors can taste the seafood dishes that taste fresh, because the side dishes are directly taken from the sea. Seafood is a typical food of Kepulauan Seribu which is famous for its delicious and fresh.

Next is of course its extraordinary beauty with calm and serene atmosphere. The blue water looks clear that blends well with the white sand. In certain spots, foreign tourists can snorkel while enjoying the beauty of the underwater world. Various species of fish and coral can be found. 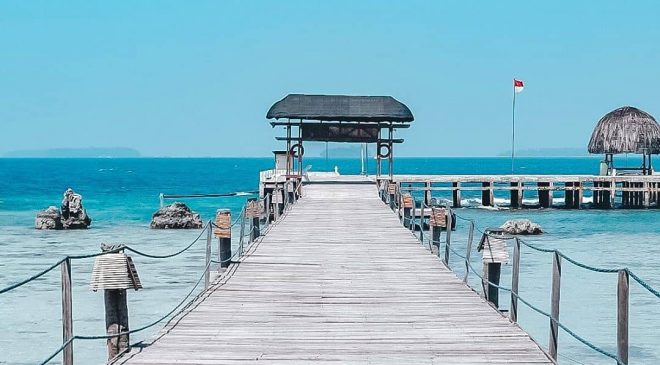