Not wanting to be outdone by other countries, it turns out that Indonesia also has many religious tourism spots that you can visit during the weekend holidays. The mosque is one of the places of worship for Muslims. However, some of the famous mosques in various regions in Indonesia can also be one of your religious tourist destinations.

Baiturrahman Great Mosque
As one of the famous mosques located in Banda Aceh, Indonesia. This Baiturrahman Grand Mosque can be one of the religious tourism places that you can visit. You can see from the front of the mosque, 5 domes are black, even during the day it doesn’t feel hot because there are 12 giant umbrellas installed. The marble floors are white, making the courtyard of the mosque a cool place. The interior is decorated with walls, marble staircases and floors from China. Stunning glass windows at the top, decorated wooden doors, decorative chandeliers and building stones originating from the Netherlands. The architecture of the Aceh Baiturrahman Mosque, which is in the ancient style of the Indian state, makes this mosque an interesting religious tourist spot to visit. But of course one cannot ignore the main use of mosques as places of worship.

Istiqlal Mosque
Located in capital city on Indonesia, Jakarta, this Istiqlal Mosque is one of big religious destination that often visited by local visitors. Here, the tourists will do worship while enjoy the view around the Mosque. Istiqlal means freedom in Arabic. An architect from North Sumatra, Frederich Silaban, combines Indonesian architectural styles with the Middle East and Europe. The simple geometry of the cubes, squares, and giant spherical dome creates a grand and monumental impression. In addition, the Istiqlal Mosque also has amazing ornaments. The walls and floors of the mosque are marble covered with geometric ornaments made of stainless steel. The main building of this mosque consists of five floors and one ground floor. 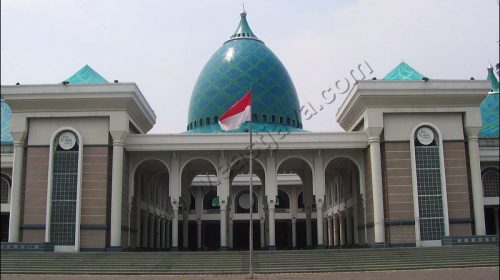 Al Akbar Mosque
As one of grandest Mosque in Indonesia, Al Akbar Mosque which located in Surabaya, East Java is the recommended Mosque for you to do worship. This Mosque noted as one of largest Mosque in South East Asia. Enter the Surabaya Al-Akbar Mosque, visitors have been greeted by 45 doors carved from teak wood, as well as kentongan placed on the front porch of the mosque. The carvings on the walls of the mosque are beautiful and elegant in their nuances. In addition, here is supported by the concept of beautiful lighting, because the building committee is working with one of the largest lighting companies in the country. Furthermore, another element that supports the beauty is the interior which is decorated with stained glass. The stained glass is made with a triple glazed unit system, which is a coating system for stained glass panels with tempered glass.

Islamic Center Mosque
Located in Samarinda, East Kalimantan, this grand Mosque often visited by local visitors who want to do worship. While, the visitors usually come from many regions in Indonesia. From the main gate, you can take a walk down the hall of the mosque and find hundreds of columns curved like a horseshoe. The interior and finishing materials of the connecting hallway look very beautiful, with a tiled floor bordered with granite and a ceiling made of real wood, a layer of melamic paint. The beauty of the veranda is even more attractive when viewed at night because the brass-plated lamps attached to the inner walls of the hallway emit a yellowish glow that creates a romantic impression.

Kubah Emas Mosque
Beside Istiqlal Mosque in Jakarta, there is also a grand Mosque in Depok that could become your religious destination. This Mosque is grand and beautiful that has a big gold dome. The atmosphere in the mosque area will feel like you are in a Middle Eastern country. The Golden Dome Mosque has five domes, consisting of one main dome and four small domes. There is a large lamp hanging in the middle of the ceiling of the mosque building. The ceiling of the mosque building is also painted with clouds so it looks luxurious. The lights inside the golden dome mosque come from Austria, specially designed by the founder of the mosque, namely Hj Dian. The chandelier weighs about 2.7 tons. The rope chandelier comes from Italy.