Banyuwangi is one of the city in East Java. It has many potential tourism objects that you want to get there. One of the tourism object as the pride of East Java is Teluk Ijo (Green Bay). The beach is still hidden and quiet in this charming white sand. Green bay increasingly exotic when the waves slammed.

To get to Green Bay, or commonly called the Teluk Ijo by local residents, the traveler must going to Pesanggaran village first. Only later, go to the Sarongan village with enough broken road conditions. Location of Green Bay or Teluk Hijau is in Banyuwangi, southern Pesanggaran, Sarongan village. This is hidden paradise in East java. Or you can take the directions towards Pesanggaran-Sukamade-Sarongan which is still a line with a route to Merubetiri National Park sukamade coast.

The beauty of the white sand beaches decorated with enchanting sound of waves. Tanks on the east and west side there are metamorphic rocks. Have the clear ocean waters and greenish colored and beautiful atmosphere make anyone who saw it felt admiration. On the eastern side there is a waterfall with freshwater.

Green Bay is behind the cliff after Batu Beach. If met with the full expanse of beach stones, you are in Batu Beach. Even so, this means that the location of Green Bay is getting closer. Little feet step forward again and you will arrive in Green Bay. Quiet, clean, and beautiful!

After arriving in Sarongan, do not rush love. This is because you still have tracking into the woods about 1-2 hours, before reaching Green Bay. 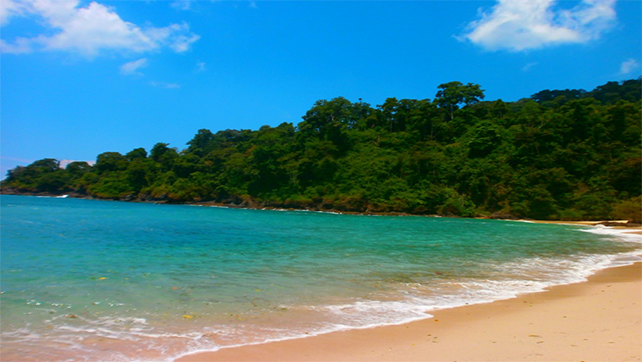